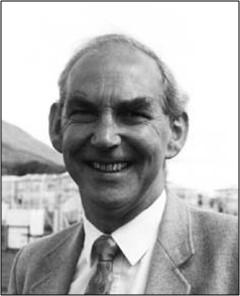 Update: The Guardian has published an obituary of Bill, for which we are grateful to our colleagues Des Thompson and Tim Burt.

We recently learned the sad news that Prof. Bill Heal died on Sunday 17 January 2021. Bill did his PhD on protozoa at Moor House and went on to coordinate the International Biological Programme (IBP) research there in the 1960s and '70s. He was instrumental in setting up the Environmental Change Network, securing substantial funding from NERC for both ECN and the TIGER programme.

He later took up the post of Head of ITE* North, based at Bush, near Edinburgh. He was an advocate of multidisciplinary research, developed many international collaborations and was much respected for his research, both in the UK and overseas. He will be greatly missed.

From Chris Britt, Britt Vegetation Management, former Site Manager at ECN Drayton: I remember meeting Bill, and listening to him speaking to a group of senior policymakers and research funders from MAFF, at Drayton, back in the very early days of ECN. He was a brilliant man and truly inspirational. I think that the description of him as "the father of ECN" is very appropriate and accurately describes one of his many achievements. My condolences to his family, friends and colleagues.

From John Whittaker, Emeritus Professor, University of Lancaster: I first met Bill in 1957 when I went up to Durham to read Zoology and Bill, as a postgraduate, demonstrated in our laboratory work. We kept in touch because of our common interests in Moor House where I was engaged in one of my projects, which eventually ran for more than 30 years there. He invited me to join the UK International Biological Programme (IBP) and we travelled together to most of the arctic tundra sites. I was able, with John Coulson to write the animal chapter in Bill’s IBP book. Later, we talked about the formation of ECN and had a joint studentship. Fortunately we were able to visit Bill and Elsie a few times at their home in Hexham and engage in a bit of nostalgia about a 60 year association. At that time he had close links with Durham and was an honorary fellow of his college, Hatfield. I had the greatest regard for Bill as a scientist and friend. He really was a gentle-man of great ability who achieved so much.