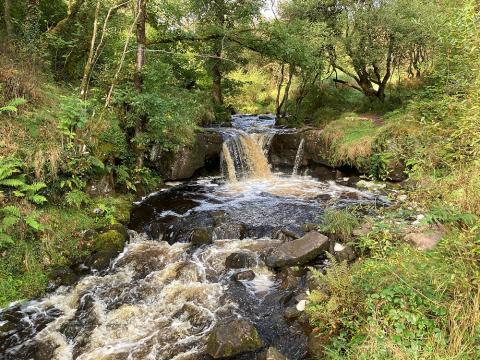 Lake and stream waters in upland regions of many parts of northern Europe and North America have become browner in recent decades, a costly issue of major concern for water companies who draw on upland drinking water sources. The increase in colour results from increased levels of dissolved organic matter, which is normally measured in terms of the concentration of Dissolved Organic Carbon (or DOC). The increased flux of organic carbon through rivers to the sea is also important for our understanding of the carbon cycle, while the increase in colour and inputs of organic nutrients can also have a wide range of effects on aquatic plants and animals. An international team of scientists has developed a simple mathematical model that shows why these changes have happened, and how climate change might be an influence in the future.

The researchers used data from eight intensively monitored headwater streams in the UK, Czech Republic, Norway and Sweden. For the UK catchments they combined Dissolved DOC data collected by the UK Upland Waters Monitoring Network, precipitation chemistry from the UKEAP Precip-Net network and National River Flow Archive stream discharge data. Three UWMN sites were included in the study: the Wye (Afon Gwy) in Wales, the Allt a’Mharcaidh in Scotland, and the River Etherow in the south Pennines. The monitoring of Allt a’Mharcaidh by the UK Upland Waters Monitoring Network contributes to the wider monitoring of the montane Cairngorm and Allt a’Mharcaidh ECN sites.

By comparing trends in DOC across northern European and North American upland regions, it is apparent that they strongly relate to reductions in indicators of air pollution in the waters, such as the concentration of sulphate. This suggests that improvements in soil chemistry, resulting from reductions in air pollution, are leading to organic matter in the soil becoming increasingly soluble, which in turn is causing more Dissolved Organic Matter (DOM) to leach into surface waters and turning the water browner. But questions have remained over the precise mechanism causing this effect.

The team’s simple model simulates how DOC concentrations varied and changed over the period 1990-2020. Using it they were able to better understand the complex interactions between improving air quality and the formation of problematic DOM in upland water sources. They also explored the influence of rainfall and temperature in this process, important for understanding how climate change may be affecting these systems.

This research is published in the journal Science Advances. The work and the reasons for its importance are neatly explained in a blog post by the UK Centre for Ecology & Hydrology’s Don Monteith, one of the researchers involved in the study.