The Cairngorms site, which joined the ECN network in summer 1999, is located high in the Cairngorms, near Aviemore in Speyside. The site lies on the western flank of the Cairngorms and is the catchment of the Allt a' Mharcaidh (a site in the ECN freshwater network). It is part of the Invereshie and Inshriach National Nature Reserve, within the Cairngorms National Park, and covers some 10 km2. The site is supported by NatureScot and the Natural Environment Research Council (through the UK Centre for Ecology and Hydrology). ECN monitoring at the site is co-ordinated by UKCEH.

This site is in the UK's sub-arctic zone and is an important link not only to other upland ECN sites but to sites in the Alps and Pyrenees (GLORIA network) and also to networks in the Arctic (INTERACT network).

The site is ideally placed to monitor changes in:

The Cairngorms site has been used intensively for research since the 1970s. An Automatic Weather Station (AWS) has been operating at the site since 1984 and was used in the Surface Water Acidification Programme from 1984 to 1994. UKCEH and MI have used the site for long-term hydrological and snow studies for about 15 years. From 1997-1999 it was one of the ECOMONT (land use change in mountain areas of Europe) sites. Researchers at several universities and institutes use the site for vegetation, soils and nutrient cycling studies. The site forms part of the larger Feshie catchment in the NICHE programme (National Infrastructure for Catchment Hydrology Experiments).

You can read more about UKCEH research and monitoring in the Cairngorms area on the UKCEH website.

During the eLTER H2020 project (2015-19), research access to ECN Cairngorms was financially supported via the eLTER Trans-National Access Programme. The Cairngorms site was one part of the 'Burnsmuir and Cairngorms LTSER' umbrella.

This is a view of the Allt a'Mharcaidh catchment, looking towards Sgoran Dubh Mor (1111 m, central peak), Geal-Charn (920 m, second right) and Creag Mhigeachaidh (742 m, right). It is best viewed on a medium to large screen.

View in new tab or window 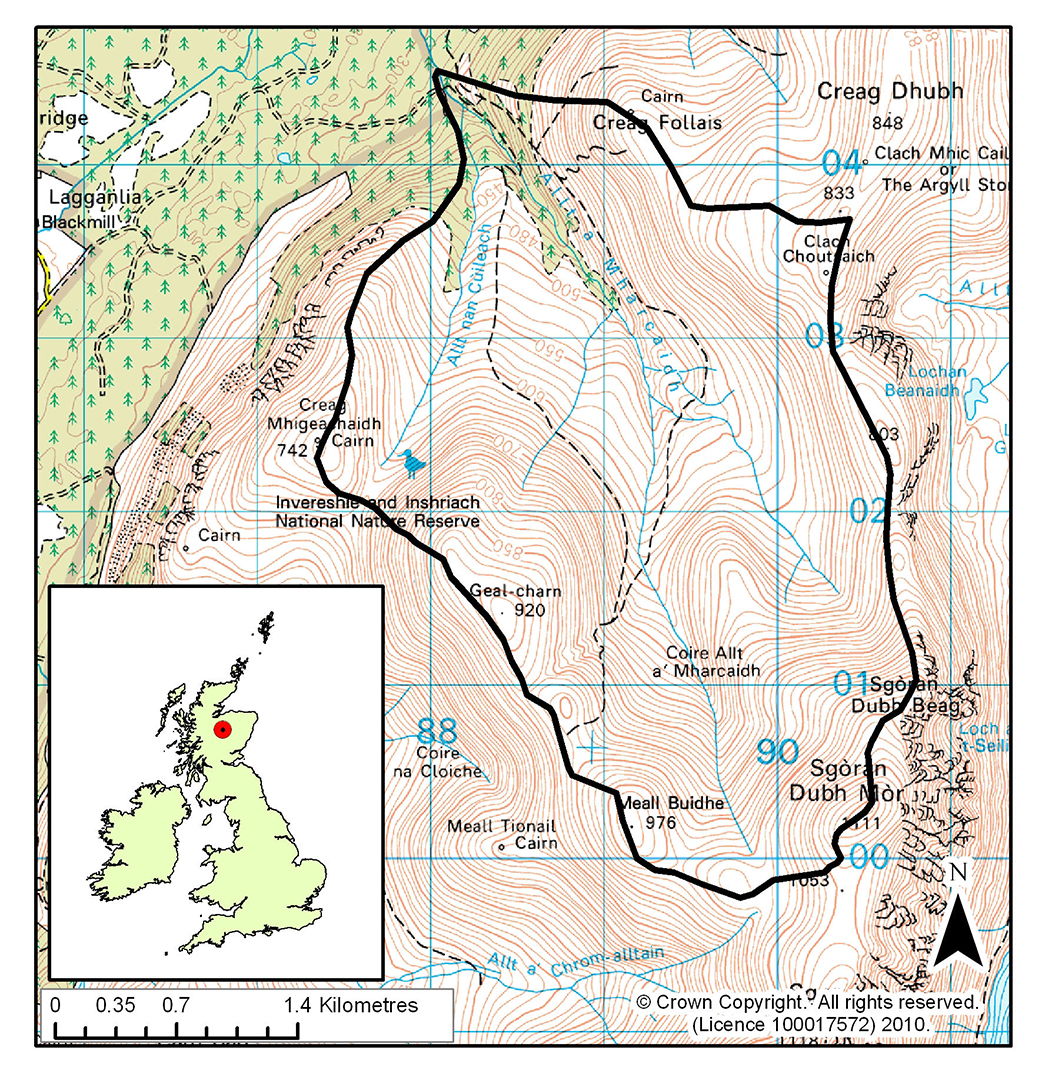